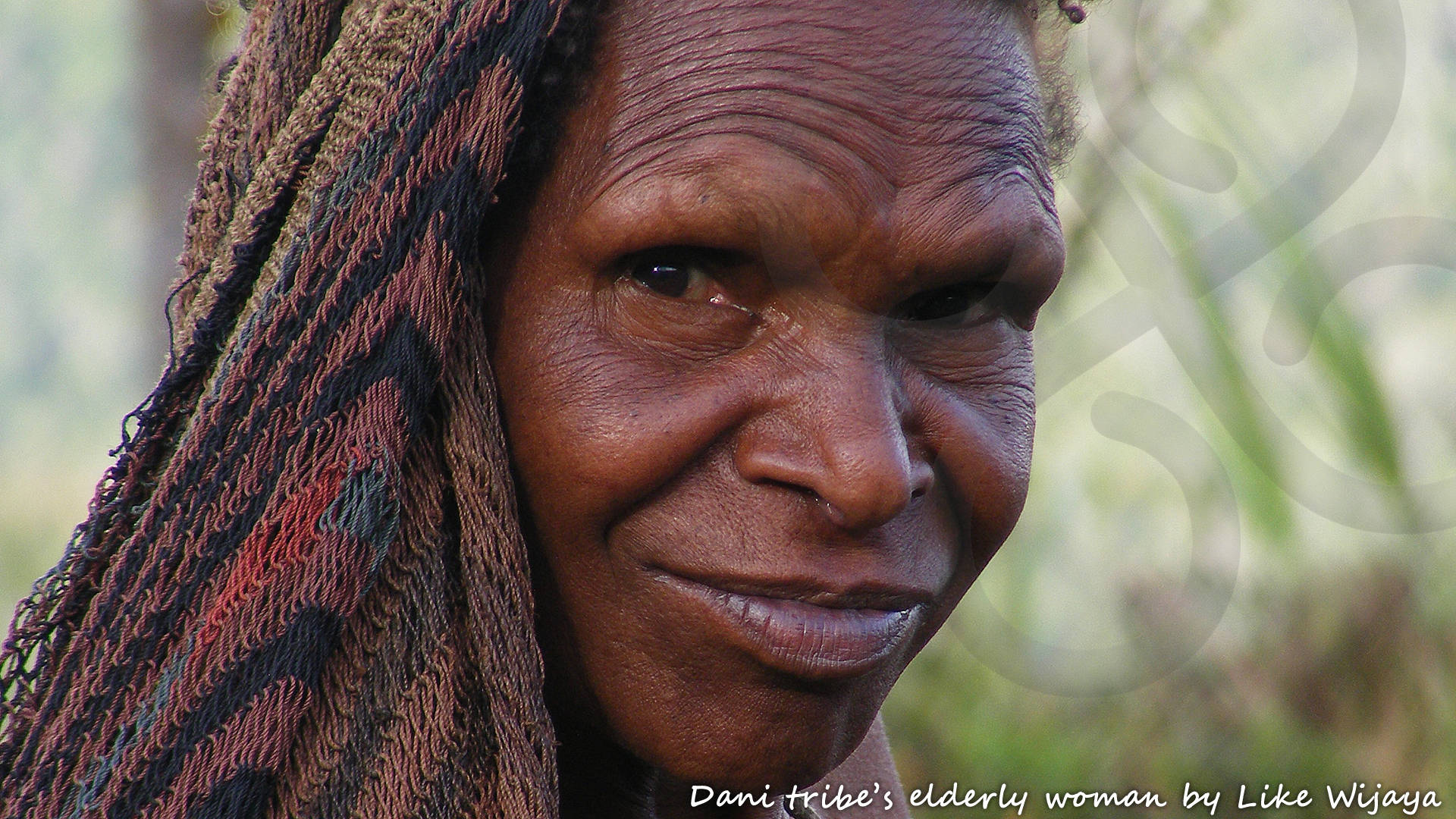 The Dani people cultivated the 80 km long and up to 20 km wide Baliem upland valley in the Snow Mountains completely unnoticed by the outside world until as recently as 1938. Copyright © Like Wijaya

At EKONEXION we firmly do believe that carefully planned and implemented ecotourism may contribute significantly to both the conservation of natural habitats and the well-being of indigenous peoples. We recognize as our duty to ensure that indigenous communities do benefit, to the maximum extent possible, from the deployment of our ecotourism activities if these are to stand any chance of genuinely rivaling the ever increasing claims to deleterious resource extraction throughout West Papua. After all, people who earn a living directly through responsible travel are more amenable to actively help protecting the environment on which their livelihoods depend. Indigenous peoples, still intrinsically connected to the natural world around them, often possess an uncanny intimacy with the specialty component of biodiversity that allures overseas visitors. Their services as guides, porters and cooks add quintessential couleur locale to your West Papua experience and are quite simply indispensable to the successful operation of a trip.

It is critically important to understand and appreciate to the fullest that all land in West Papua or on New Guinea more generally is considered to be owned by the indigenous New Guineans, the Papuans, who generally exercise strong control over land and resources. They are the true custodians and guardians of the future of these magnificently forested lands. Land on New Guinea can be owned communally by all members of a village community, but more commonly is being subdivided between the various kinship groups that make up a community. Known as clans or bands, these kinship groups may internally be structured hierarchically, and further subdivide ownership accordingly between the different families that make up a clan. Besides customary ownership proper, there are varying degrees of usage rights granted by landowners to community members more widely, mostly as a result of intermarriage between clans or other mutually beneficial exchanges. This leads to the ordinarily complex situation that any given plot or tract of land can be owned by a group of people, while at the same time a second group of individuals hold hunting or subsistence rights that fundamentally restrict the first group's ownership. Thus, customary land tenure is inherently fluid and unstable because land borders between tribes, clans and families as well as granted usage rights tend to be loosely defined and remain closely linked to dynamic social processes. Unfortunately, tribal land disputes and associated feuds remain common in West Papua and are the primary cause for safety concerns in the context of tourism because improperly coordinated visitation of contentious lands by tourists may exacerbate existing problems or create new ones. Before trespassing and making use of customary-owned land in Indonesian New Guinea, even for essentially non-invasive activities like bird-watching or nature recreation more generally, it is critically important to secure permission from all stakeholders involved through an open and fully participatory deliberation process seeking broad consensus.

Traditional societies in West Papua are rapidly being overtaken by the 21st century. Ever increasing cash-dependency and the decay of customary land tenure systems incite indigenous communities to no longer principally oppose resource extraction, but to merely expect to reciprocally benefit from it. Any conservation project intervention thus requires effective cash-generating alternatives to rival destructive resource use, even if communities do understand the long-term deleterious impact of such practices. Genuine ecotourism, in no small part, can make a difference here. — Like Wijaya, Founder, EKONEXION, Indonesia

Our team would like to congratulate you on your outstanding commitment and responsible travel efforts. We commend you on your dedication to environmental sustainability, and all of the outstanding social and environmental programs and initiatives. We truly appreciate your hard work! — Wild Asia, Malaysia

I want to say again thank you very much for organizing such a wonderful expedition. Working on the 'Life' project I have been fortunate enough to have filmed many great bird spectacles over the last two years, but our trip to West Papua has been one of my favorites. This is not only because of the truly incredible birds, but also for the excellent logistics which you set up. I don't think I have ever eaten so well while filming in a tropical forest! — Barrie Britton, Cameraman 'Life', BBC Natural History Unit, UK

The way EKONEXION implements ecotourism is impressive and should be widely copied. It actually took me some time to fully understand the range of the work you are doing. State of the art 'ecotourism' currently seems to be speeding along logging roads, but EKONEXION proves that you can even tick off a species list (if that's what you want) in a very different way. — Carl Christian Tofte, Wildlife Artist, Denmark

A resounding thank you for introducing us to so many wonderful birds. Not cheap — everything is expensive here at the end of the world — but worth every cent. — Victor Mason, Founder, Bali Bird Walks, Indonesia

Congratulations to all our worthy winners and finalists. All of them are role models for the industry. Their investment in community engagement, workers' welfare, cultural conservation and environmental stewardship — make the travel industry a more exciting place to work. Most importantly, they're supporting long lasting development in their destinations across Asia, ensuring a more sustainable future for the places we love to visit. — Amy McLoughlin, Responsible Tourism Awards Coordinator, Wild Asia, Malaysia

Thank you all for such a wonderful trip. I can easily say that it surpassed all of my expectations. The relaxed, easy-going nature of the whole expedition was only possible because of a great deal of time and effort going on behind the scenes. It really was lovely to be in such a wonderful place with people who clearly love the area and take such care and attention to show its secrets to others. And I could not write without reiterating my amazement at Like and her sous-chef's abilities in creating such incredible food in such relatively bare surroundings. — Dr. Catriona Wootton, UK

Needless to say we are still talking about our trip and the wonderful time we had, not the least of which was the pleasure of your company. There is nothing we can think of that would enhance your tours. You have literally thought of everything and really go the extra mile to ensure your guests are comfortable and get maximum value. We were also most impressed with the way you deal with the local communities. — Doug and Ulai Kirwin, Thailand

Thank you for your hospitality and kindness on my recent trip. You provided all I could have hoped for and more. I would recommend EKONEXION as the first choice to anyone wanting to learn about the ecology of West Papua firsthand. — Carel P. Brest van Kempen, Wildlife Artist, USA

At EKONEXION we are intimately familiar with the many peculiarities of social organization and associated land tenure in West Papua, and in engaging indigenous peoples in our ecotourism activities, we have always embraced a rights-based approach, strictly adhering to the principles set forth in the United Nations Declaration on the Rights of Indigenous Peoples (UNDRIP) and, more generally, the Universal Declaration of Human Rights (UDHR). We principally adhere to customary land rights (called hak ulayat in Indonesian) and always endeavor to strengthen and revitalize customary land tenure systems, which until recently broadly sustained biodiversity at the landscape level throughout West Papua. Increasingly, however, indigenous communities throughout the territory claim access to forest resources beyond subsistence use. As such, we do reserve the right to make the magnitude of our financial compensation for deploying non-invasive ecotourism activities on ancestral lands dependent on local conservation attitudes and the degree of active participation in habitat protection by requesting village authorities and landowners.

We exclusively employ indigenous people entitled to ancestral land rights and/or actually residing at the respective sites that we visit. Because we conclude all ground arrangements with indigenous communities directly ourselves — hence effectively eliminating third party agents outside our control — and by consistently applying a competitive salary scheme, EKONEXION guarantees fair remuneration of the services indigenous people provide. By handling trips in close collaboration and continuous consultation with the people belonging to the places that we visit, we are able to both increase their economical benefits, for instance, in the form of local purchase of food surplus, as effectively reduce our impact on traditional societies. We are keen on training and assisting indigenous people to stream through in our organization or to develop their own derivative businesses.

❯Read on about the natural wonders of New Guinea (from www.PapuaExpeditions.com).

❯Read on about the geopolitical and biogeographical delimitation of West Papua (from www.PapuaExpeditions.com).

❯Read on about the indigenous peoples of West Papua (from www.PapuaExpeditions.com).

❯Read on about the flora and fauna of West Papua (from www.PapuaExpeditions.com).

❯Read on about the birdlife of West Papua (from www.PapuaExpeditions.com).

We would love to hear from you at EKONEXION! Email us at manager@ekonexion.com or simply click on that address to automate your email app. We endeavor to respond to all queries within 72 hrs. If you have not heard back from us by then, please first check your 'spam' or 'junk mail' folder through your web mail. If our response is not there, then kindly resend your initial communication. Many thanks! Finally, we do respect your privacy and hereby also guarantee that any personal information that you may submit via electronic mail will be kept strictly private and on no account shared with third parties.

Copyright © EKONEXION 2005-2021. All rights reserved. Linking is always possible of course, but without the express prior written consent of EKONEXION the content of www.ekonexion.com may not be copied, reproduced, republished, uploaded, posted, transmitted, or distributed, in whole or in part, for any purpose other than individual browsing of this web site. Modification of the content for any purpose constitutes a direct infringement of the copyrights and other rights of EKONEXION. Utilization of any EKONEXION material on any other web site or networked computer environment is prohibited unless specifically approved in writing by EKONEXION.

We genuinely respect your privacy: www.ekonexion.com principally does not make use of any cookies for any purpose. In order to enhance viewing experience across widely varying screen sizes, this web site uses non-invasive media queries. You may, however, explicitly submit personal information via electronic mail. EKONEXION hereby guarantees that any information gathered in such manner will be kept strictly private and on no account shared with third parties.